Nobody likes vertical videos. Movies and television shows are horizontal because our eyes are laid out horizontally, therefore our field of vision is wider than it is tall. Since the advent of the smartphone, however, videos on YouTube seem to be filmed vertically more often than not. When videos are shot vertically, important action is often missed because it’s outside the frame, and a lot of useless sky and ground are captured. The viewer’s frustration ensues.

But it’s not the users’ fault. It’s a design flaw. And it can be fixed.

There are two problems that lend people to record video vertically on their phones. The first problem is that the user must change how they grip their phone to film horizontally. It’s just natural to hold the device the same way you’d hold it when talking on the phone, or texting, or browsing the web, or launching the Camera app–in an “underhand” grip. This is a strong grip in which the phone is wrapped in the palm and allows the user to tap the screen with their thumb.

To keep this grip and film horizontally, the user would need to bend the wrist awkwardly:

The second problem is orientation of the Camera app’s toolbar. Every other app that can be used in both a vertical and horizontal orientation will adjust its controls to be on the top and bottom of the screen. In Safari, the address bar is always on top and the control buttons (back, forward, bookmark, etc.) are always on the bottom, regardless of orientation:

Safari in iOS 6 in vertical orientation 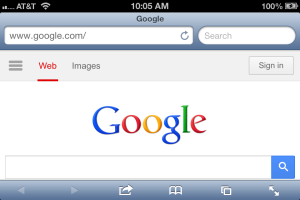 Safari in iOS 6 in horizontal orientation

This same behavior exists in Mail, Notes, Maps, and countless other Apple and third-party apps.

But not Camera app. The mostly-transparent controls are always at the top of the screen, but the opaque toolbar with the prominent controls (the “take picture” button, the camera/video toggle switch) doesn’t move. When the phone is horizontal, this toolbar awkwardly ends up on the right side of the screen. 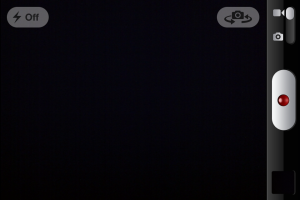 Camera app (video mode) in iOS 6 in horizontal orientation — why isn’t the “start recording” button on the bottom?

At the very least, Apple should make the toolbars behave like every other app: keep them on the top and bottom, regardless of orientation. But to truly fix vertical video syndrome, to get the user to think about rotating their phone and switching their grip, Apple needs to go one step further.

When the user toggles from camera mode to video mode, the prominent toolbar should always be locked to the long side as if the phone were horizontal. The user could still film vertically if they want, but it would just feel wrong to see that toolbar on the side, essentially creating an unconscious reminder to the user that they need to rotate their phone. See my mockup below: 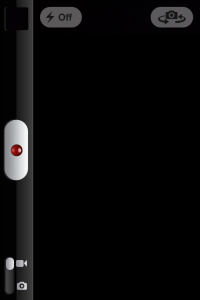 What the Camera app in video mode should look like in vertical orientation. User sees it and says, “Whoops! I’m sideways!” 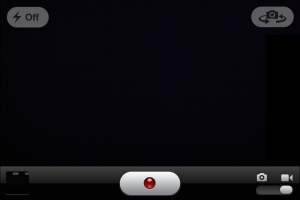 What the Camera app in video mode should look like in horizontal orientation. Ahh, that feels right.

As for camera mode, the toolbar could rotate with the phone, since there are more reasons to take a vertical photograph than video (buildings, trees, people, etc). But better still would be to to lock it into the short side, providing a more obvious visual cue as to which mode the app is in. Short side? Camera. Long side? Video.

What do you think? Would this fix vertical video syndrome?